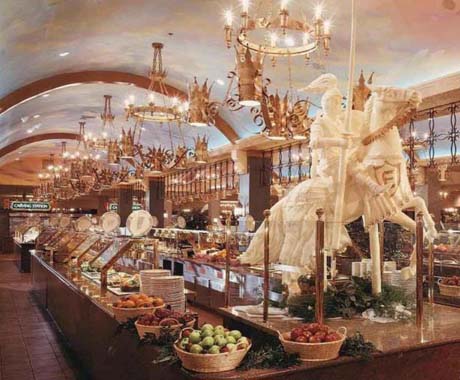 
The buffet at Excalibur offers endless variety for whatever you crave. Feast on cuisine from around the world or dive into our Crab Leg Fest every Friday and Saturday night. Finish off with a treat from the interactive dessert station. Want more? Pick up an All Day Pass and come and go as you like for breakfast, lunch or dinner! 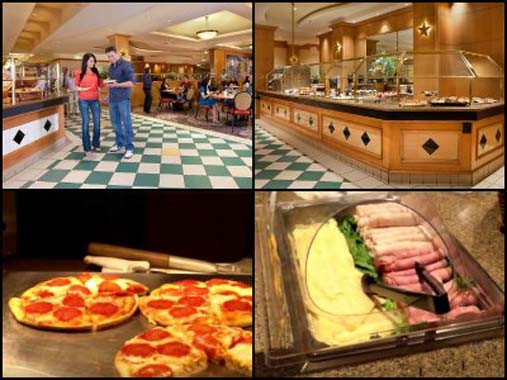 
One of the largest Las Vegas buffets serving all your favorites for breakfast, and dinner including  bar, carving station, American and International favorites, all-you-can-eat fried shrimp and decadent desserts. Kids under 4 always eat free with a paying adult.


The original Bacchanal was Caesars Palace's gourmet room where attendees took three hours to taste a variety of gastronomic extravaganzas while  waiters and waitresses served wine. The new buffet indulges in a similar  experience with more than 500 different dishes made daily from more than 800 recipes and a facility designed by restaurant designer Super Potato. The Bacchanal Buffet is divided into nine different show kitchens: Mexican, Italian, Chinese, Japanese, American, seafood, pizza, deli (including soups, and charcuterie selections) and desserts. All the "comfort foods" from mac 'n' cheese and mashed potatoes to prime rib  served. Each show kitchen also has an action station with plated dishes and "minis" (small sized portions of modern cuisine to tempt foodies like red velvet pancakes,  lamb chops and roasted South Carolina shrimp and grits). Among the uniquely crafted items, guests will discover  barbecue ribs and brisket, fresh tortillas and oyster shucking. Plus, there are plenty of options to please vegetarian, vegan and  eaters.


Bacchanal is a blend of familiar and adventurous dishes. While you’ll find many high-quality comfort food staples at Bacchanal—sliced pizza, barbecue, French fries, Caesar salad, fried chicken—this place thinks out of the box, too. Go ahead and try the roasted red pepper and crab gazpacho or gumbo-esque shrimp and grits dish.

Bacchanal’s spiffiest new offering is caviar, whole fish and lobster as upsell charges.
The whole fish option was introduced to target the large groups that often dine at Bacchanal. Available for lunch and dinner, you can order a whole fish for the table with prices ranging from $21.19 to 26.19 per pound. 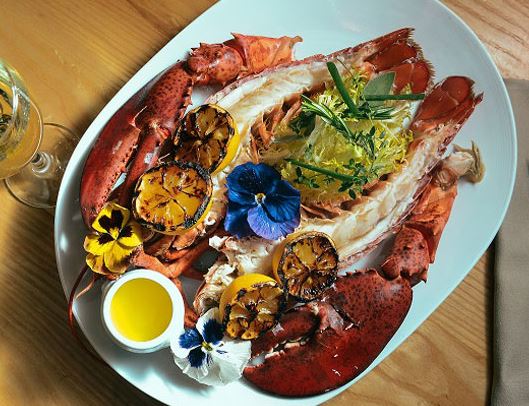 
The line pass.
Though Total Rewards Diamond and Seven Star members have their own VIP line, any diner can purchase a $20 line pass to skip Bacchanal’s (sometimes) lengthy lines and wait times. Additionally the new digital FreshTxt kiosks let you “check in” in line and virtually hold your place for hours, alerting you by text when it’s your turn. For a $15-$30 upgrade cost, Bacchanal Buffet is also available for those who have purchased a “Buffet of Buffets” pass. 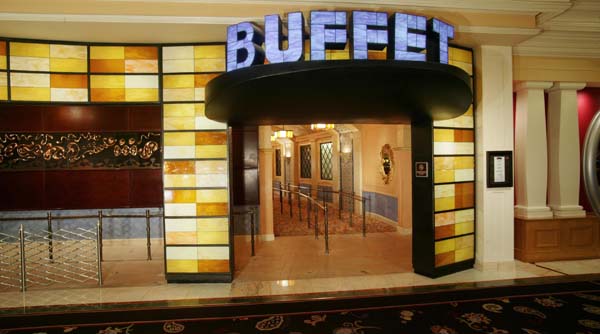 
Leave your misconceptions of buffet dining at the door, because The Buffet at Bellagio is an experience like no other in Las Vegas. Here, our talented chefs bring together the freshest ingredients and the best dishes from around the world, including Italian, Japanese, Chinese and American cuisines plus a whole lot more. Be wowed by the talent on display at our live action cooking stations and take your taste buds on a journey of discovery as you sample favorite dishes and new temptations. Take your decadence to a new level with our weekend champagne brunch or try our unlimited drink option for $12.99 per person, allowing limitless refills on Margaritas, Bloody Mary’s, sparkling wine or beer. Every Friday and Saturday from 3:00 p.m. – 10 p.m. during Gourmet Dinner Service, guests may savor the delicate flavors of some of the world’s finest caviars Ikura and Tobiko—either alone or as complements to a selection of freshly prepared traditional dishes. At this station, a chef attendant will top delicate,house made blinis, miniature buckwheat waffles, freshly rolled sushi and Ahi tuna cones, according to each guest’s desires. A variety of traditional garnishes including chopped egg, onions and crème fraîche are available to create unforgettable flavor profiles that please every palate. 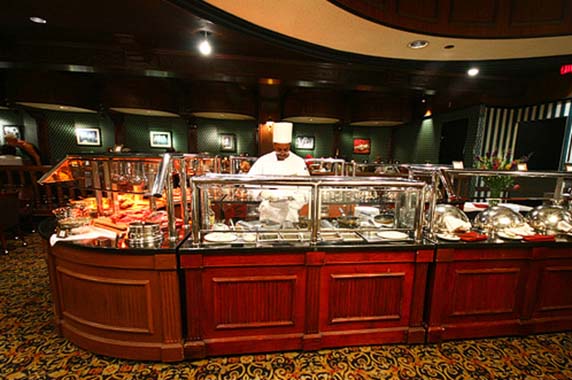 Bally’s Las Vegas invites you to delight in the finest Las Vegas buffet, 25 years running. Start your Sunday with the exquisite Sterling Brunch served in the rarefied setting of Bally's BLT Steakhouse; voted Best
Brunch by the Review Journal. Champagne, Sturgeon caviar and lobster mingle with freshly prepared sushi, omelets and beef tenderloin at our weekend classic that guarantees a diverse dining experience.
Tempting desserts and time appropriate drinks (mimosas, anyone?) round out the selections. If only all Sunday meals could taste this good.

Sunday
The price is $85 if you have a players card, which is free, so maybe get one.